By wakaadmin on December 7, 2011 in Uncategorized 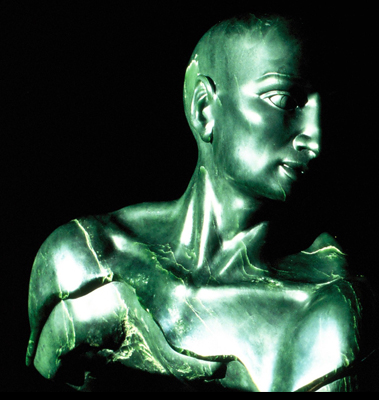 POUNAMU is a Maori term for nephrite (New Zealand Jade), and also to a lesser degree bowenite and can be roughly divided into four main types with several diversifications …Kawakawa, Inanga, Kahurangi and Tangiwai. Kawakawa, the most popular jade sourced for carving, named after the leaves of the tree of the same name, is a dark to rich green with dark flecks (iron inclusion); Inanga, a pearly pale grey green in colour, named after the native New Zealand minnow; Kahurangi, the most highly translucent flawless variety of pounamu and also the rarest – the word kahurangi derives from the clearness of the sky – is esteemed by most above all other varieties; Kokopu, named after the native freshwater fish known as (galaxidae), the markings are distinctive brown spots on a yellowish olive green; Totoweka is usually a dark green with red spots (iron) and is described as blood of the weka (a native New Zealand bush hen).

For thousands of years humans have used jade for tools, weapons, adornment, currency, and believed in its healing properties. In fact it is so revered in Chinese culture its physical properties have been compared to the virtues of life itself. At Waka we celebrate three generations of jade workers…. Tyson Lynes works under the guidance of his father Rob Lynes, who learned from his father (now deceased). The first lesson one learns is to respect the virtues of the stone: its toughness – formed from heavily felted fibres, it is a calcium magnesium silicate, harder than tungsten steel, it is frequently quoted as the toughest natural material; its colour and translucency, – it can be any shade of green, black white, grey, blue, brown, orange and yellow; it also has an unlimited variation in markings, no two stones are the same.

Its sensual qualities: it must be handled, it has a pleasing cool slightly waxy feel that warms to the touch. Supporting the sense of feel is inherent in every piece worked at Waka. Its sound qualities… appreciated by the ancient Chinese who carved gongs and wind chimes, Maori were also well aware of this attribute and many of their artifacts were specifically designed for their musical ring.

For thousands of years humans have used jade for tools, weapons, adornment, currency and a belief in its healing properties, in fact it is so revered in Chinese culture its physical properties have been compared to the virtues of life itself.